It is widely spread that WEBi English, also known as Web International English, shut down tens of centers in many cities, involving up to 100 million yuan. It has aroused great concern among the staff and the students. 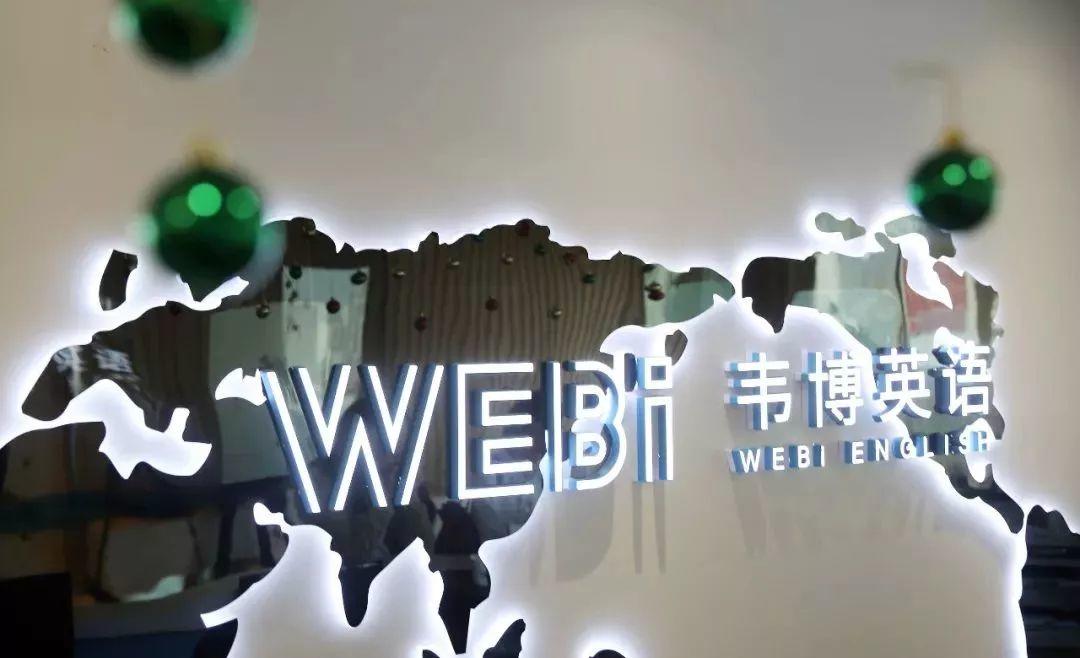 Recently one who calls himself a conscientious staff member of Webi posts a letter on the Internet, saying that all six training centers in Beijing haven’t paid their employees for quite a long time and have ceased operating. 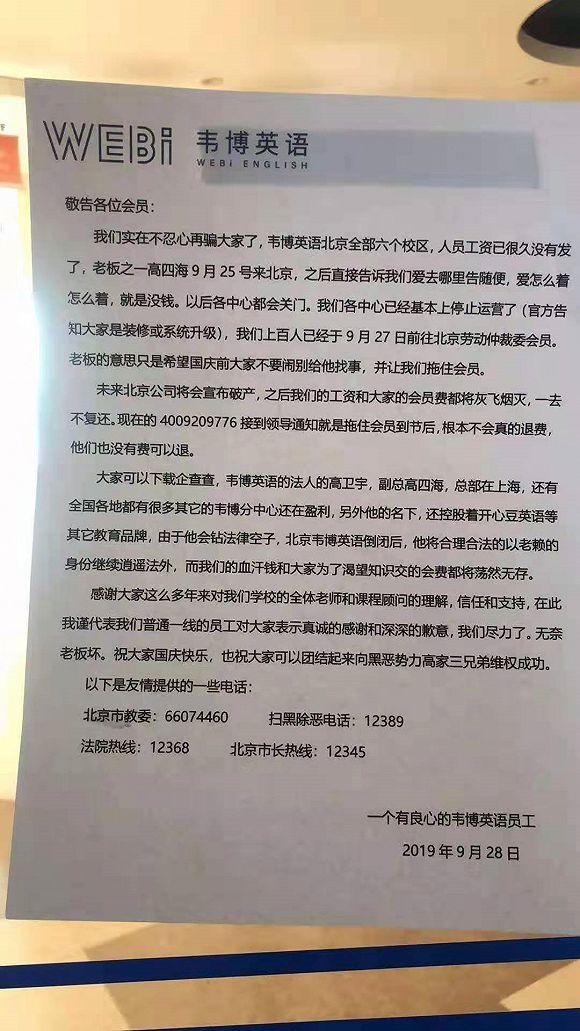 The Beijing branch will declare bankruptcy as he said.

Webi has also closed three centers in Chengdu and four in Tianjin as reports. Some netizens say on Weibo that the branches in Nanjing, Hangzhou and Shanghai are under the same situation. However, some such as the Guangdong branch are running as usual by now. 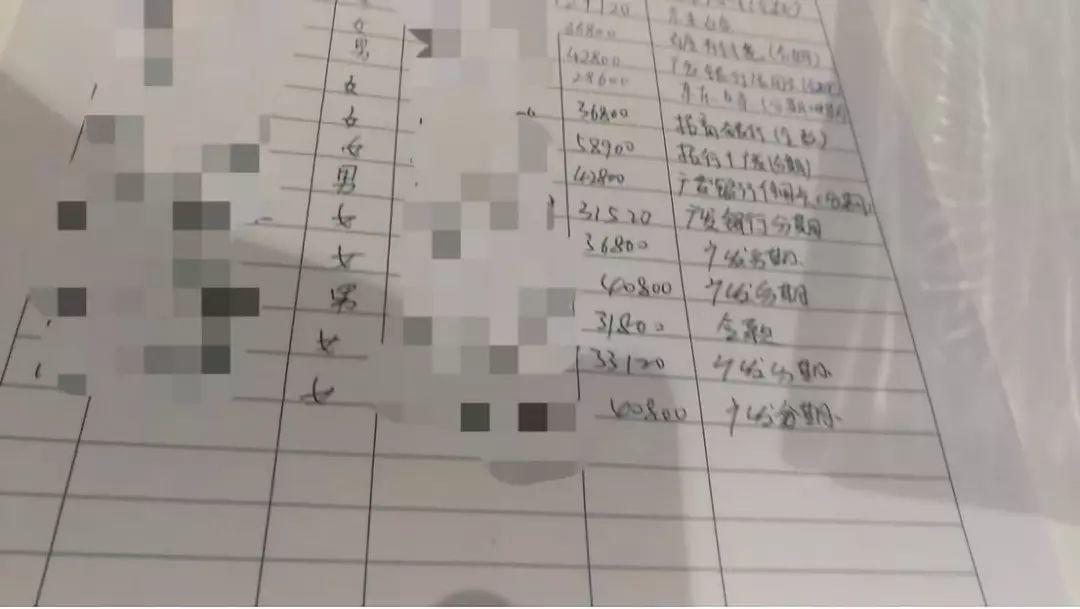 A registration form of the payment statistics

In Shanghai, Tianjin and Chengdu, related government departments have started to investigate the issue and urged Webi to safeguard the students’ legal rights and interests. Some staff have continued giving classes for the sake of their students.

One of the staff of the Suzhou branch said they would try to help students to get the money back.

According to Webi’s official website, Web International English is one of China’s most recognized brands. Since its inception in 1998, Webi has gone on to establish over 150 training centers throughout China.

Most of the students have paid 30,000 to 40,000 yuan in tuition, some even have spent 150 thousand yuan. It is reported that nearly 100 million yuan is involved in total.

The Webi English (Beijing) alleged that the students can choose online classes or transfer to other centers as a substitute, or apply for refunds. However, it seems hard for many students to get the refunds. 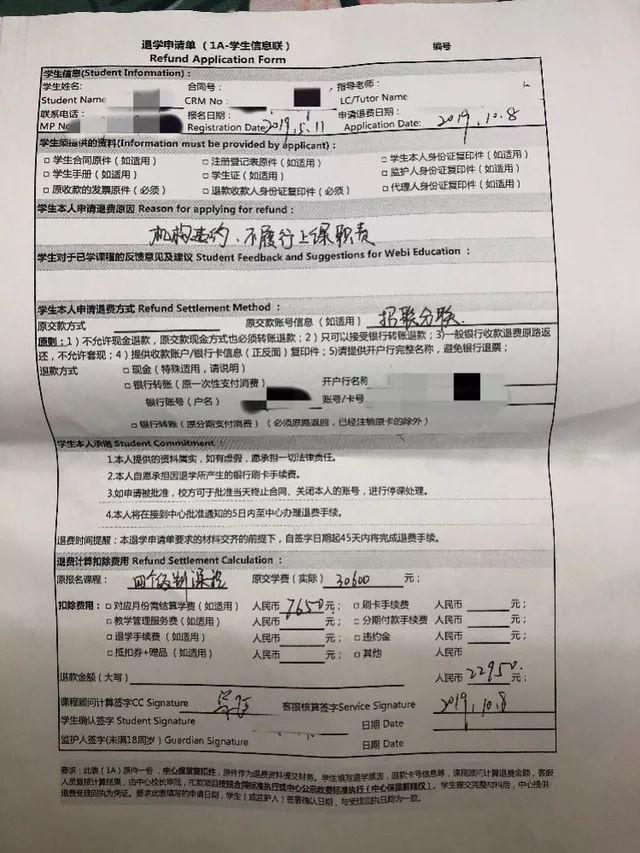 More than half of the total tuition fees are asked to be returned, let alone the default of salary. It is reported that over 200 employees in Beijing haven’t been paid for up to three months.

Students don’t know whether or when they can have the money back.

Some parents say that some of the counselors of the center used to recommend them to use online installment payments for the expensive tuition. 70% of the students have paid by loan as reports.

That means that they still need to pay for the installment until they receive the refunds, otherwise their credits will be impacted. 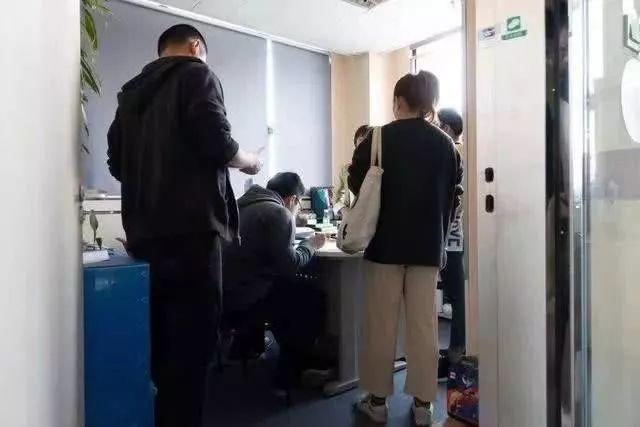 It is not the first case of financial crisis involving an education franchise. In 2017, a well-known training institution Xinsilu (New Ideas For Education) was suddenly closed without repaying its students.

In July alone, the council of Shanghai’s Pudong New Area received 27 complaints, related to the shutdown of an early childhood education center KariBaby.

Although some of the Webi English training centers are still running, foreign teachers and Chinese teachers give lessons as usual, both students and staff feel hopeless for the repayment.