In recent months we have seen many articles online related to the topic of “Exit Ban”. Where the individual is barred from leaving China if accused of any wrongdoing. An expat from Shenzhen started crowdfunding ( fundraising) for himself online on website gogetfunding.com to fight judgment in court. 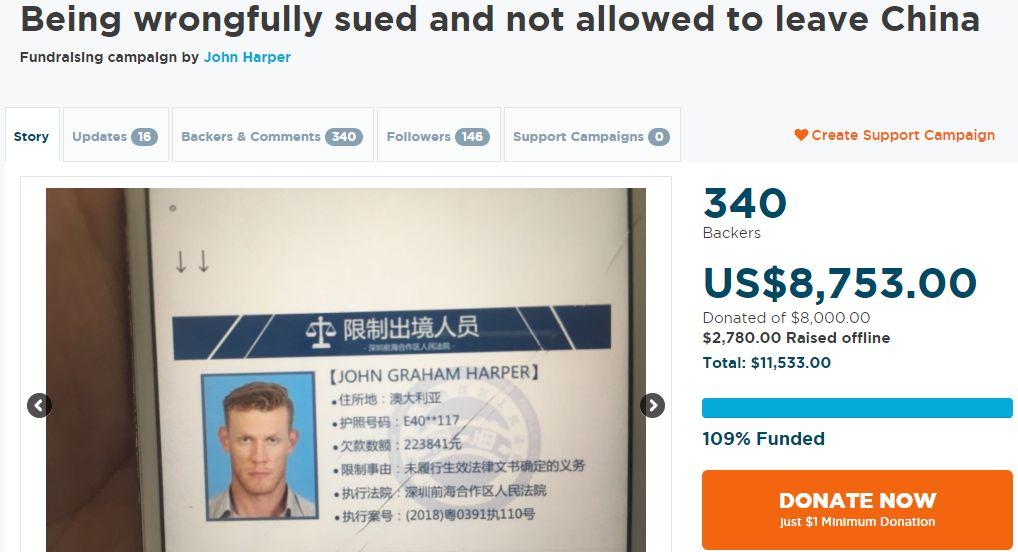 Disclaimer: HACOS takes no responsibility for the accuracy, currency, reliability, and correctness of any information provided in this article.

Introduction Video Posted By Him For Support

Here is the full story that he posted on the crowdfunding website.

Hi, I’m John Graham, an Australian expat trapped in China and unable to leave the country (even to visit my aging parents back home) due to the actions of a local con-artist I made the mistake of putting my trust in.

It’s been 18 years since I first came to China and made Shenzhen my home. I love the country, love the city (Shenzhen), and most of all I adore the Chinese people who have befriended and supported me over the last two decades of my life. Unfortunately, due to my own misplaced trust, one bad actor seems to be hell-bent on changing all of that.

I am a Fitness enthusiast. Biking, hiking, running, weight lifting – everything goes. In 2014 I got interested in boxing and was in Shanghai attending a boxing event where I chanced upon a guy who seemed to share my admiration of the sport. I was the athlete, he was the patron of the art. A friendship based on mutual interest was quickly formed.

Back in Shenzhen, I had opened a personal fitness training gym with two other partners a couple years prior, which unfortunately was struggling due to a lack of funds. When one partner suddenly left, things got even tougher. We (I and my remaining partner) decided to try to transfer the business off. After months of trying (and failing) to find a potential candidate to salvage the work we had put in to our dream our business, I was discussing the situation with the man I will henceforth refer to as my ‘Gym friend’, and in what I considered at the time a miraculous turn of events, he said he had already been looking to start a fitness gym and might be interested in taking over the business.

My Gym friend spent the next several months training and hanging around with us at the gym ostensibly to ‘learn the ropes’ of the business, all the while telling us how excited he was to own the gym and the plans he had to invest more to turn the gym into the business we had always dreamed it could be, but not had the capital to realize our vision. After many months together I confided in him that I was at a financial low-point in my life, and he offered to clear all the outstanding bills against the gym and its infrastructure, in return for us transferring over the business to him, with the promise that we would still have jobs continuing as personal trainers with him.

It felt like a guardian angel was watching over me as this offer was the perfect solution to all my problems – the business I had invested my time and sweat into would continue on and be run by a friend who had the same vision as me.…

I wish I knew then what I have come to know now – I could have saved myself from all this current misery. The Gym ‘friend’ turned out to not be a friend at all, but a con man who saw in me the opportunity to take advantage of a naïve foreigner he could easily manipulate. If I had been smarter and had a lawyer translate the Chinese contract he wrote up for the transfer of the business which I (stupidly) signed thinking it was just a formality, I would have known that I was actually putting myself in a very dangerous position as I was the FaRen (legal Rep) of the business, I had given him my ID copy, and the documents I signed allowed him to easily go after me in court.

Completely unaware of this at the time, I continued on under the assumption that everything was normal. When a few months later my ‘gym friend’ said he was letting me go as a trainer in his gym, my only shock was that a friend was firing me from my job.

5 months after letting me go, he became crazy angry and threatening, saying he was going to go after me, get someone to follow me home, and violent treats. I tried to meet him to discuss what the problem was but he refused to meet. I didn’t want any part of his threats and behavior and just moved on with my life. 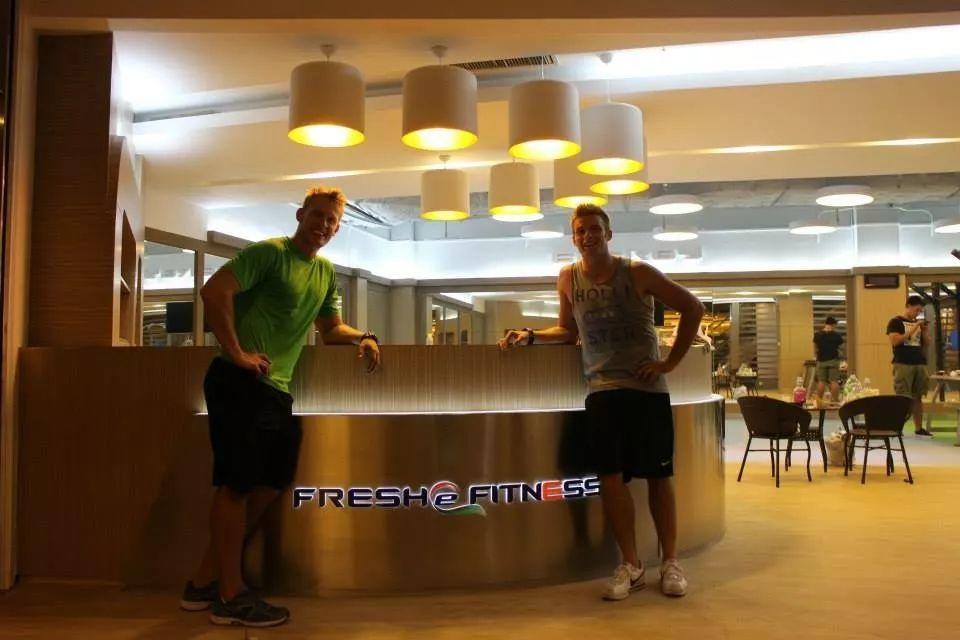 Fast forward almost 3 years and as I recently tried to travel out of the country, I was denied exit at the border and told I had been tried-in-absentia and found guilty in a civil court case against me. The judgement was that I owed 217,000 (now raised to 223,841) to my ‘Gym friend’ who had sued me making false statements to the court that I had agreed to a personal loan and that the gym had never been mine to transfer. His entire friendship act had been a trick from the start to get me to sign his false papers, a scam which I’ve come to find out is well known and used to target both Chinese and foreigners. 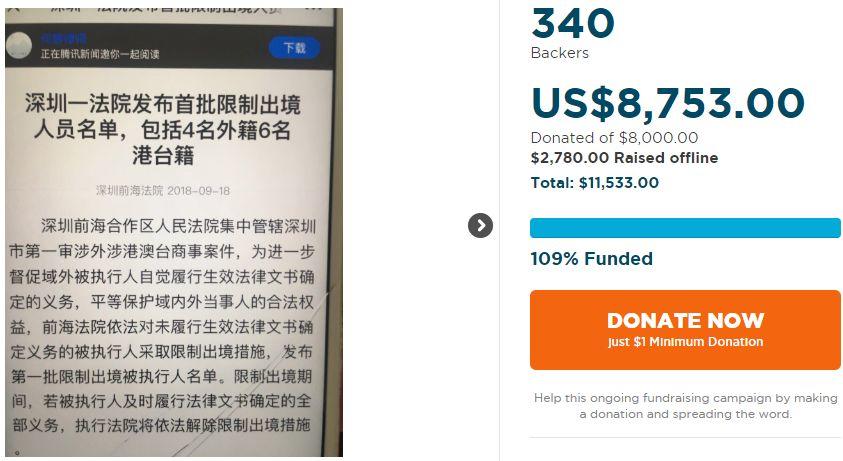 I learned that he had since sold off all the equipment and assets the previous year which were legally his to sell based on the contract he had given me to sign. This had been his plan right from the start.

So this is where I’m at now, barred from leaving a country I have for 18 years considered my adopted home, by a foreign legal system that was turned against me by a local con-artist, and with no idea when or how I will be able to earn the amount required to be able to leave the country. I want to continue my stay in China, I love this country and all it has done for me, but not being able to see my parents at this time is very stressful and I must deal with this situation to get off the blacklist.

WHERE YOUR CONTRIBUTION GOES:

My goal in launching this campaign isn’t to generate the cash to pay off this judgment. I have built a life in China and will eventually save enough to pay off the judgment if that is what’s necessary.

My goal is to raise funds that I can put towards actually fighting this judgment in court so that this con artist doesn’t get away with the easy profit he expected, and hopefully makes his life difficult enough that he won’t risk doing this to the next guy. The problem here isn’t with the Chinese legal system, which contrary to a lot of assumptions overseas is actually quite fair both to foreigners and Chinese.

The problem is that a single scam artist found a way to take advantage of a situation to cheat someone he believed would be an easy target and not be able to fight back. I have spoken to a local lawyer and there is no guarantee that I can win the case to reverse the judgment completely so I can’t realistically put my own cash into hiring an expensive legal team to fight this when I don’t even have enough to pay the initial judgment, but if I can crowdfund the support to fight this with a real legal defense, no matter what happens I will be forcing costs on the con artist that he didn’t expect to pay, and whether I win the judgment reversal outright or just put enough costs on him that he asks to settle, every dollar I can raise will be a dollar he loses and dollar less that he will profit off cheating someone who trusts he gained.

So above was his side of story that he posted on crowd funding website (gogetfunding.com). I will like to add that legal system in China is completely fair and don’t discriminate between Chinese or foreigners. The only biggest disadvantage the foreigner can face in Chinese legal system is language barrier or lack of understanding of Chinese law in general. Also exit ban is not something which is special for foreigners, even chinese citizens who are accused of any wrongdoings face that. Everyone should respect and follow the law in China.

Signing of the Contract: Never sign any document or contract which is in Chinese without understanding the context of it. Ask for english translation copy of contract whenever possible or ask any of your trusted chinese friend to read it for you.

Contact Lawyer or Legal Service Provider: Before doing any big business dealing, always consult lawyer to help you draft contract in a way that it safeguards all your rights.

Cost of Running Business in China: It is imperative that you never underestimate the cost of running successful business in China. Starting new business require lot of funds, rental cost and salaries are quite high in big cities and it also takes quite alot of time for any new business to become profitable. So always do a sound financial planning for your business. Insufficient capital is biggest reason why most new small businesses fail.

Lastly, we would like to wish John best of luck and hope he can get out of his troubles soon.