13 Injured in Guangzhou as Car Ploughs into Pedestrians!

At least 13 people were injured when a car plowed into pedestrians in the southern Chinese city of Guangzhou on Tuesday morning.

A car pulled away at a red light in Tianhe district at about 8.50am and drove through a pedestrian crossing, hitting a number of people before colliding with two cars.

The injured people were taken to hospital, two of whom were in critical condition, the Guangzhou police bureau said on Weibo, China’s equivalent of Twitter.

A motorist surnamed Ding was detained, the police said. Investigation of the incident is continuing. 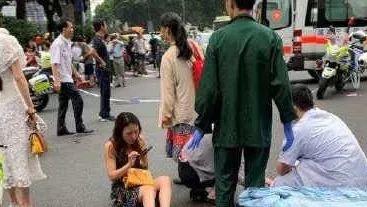