No Money, No Hope, They Live Like Rats in Shenzhen

When you hear the city name Shenzhen, you, an expat might you are, will give it a thumbs-up because of its leading status in economic development, technological advancement and the city’s modernity in China.

Shenzhen once was the birthplace and test ground of China’s reform and opening initiative in the 1980s, it is China’s most important high-tech and manufacture base. 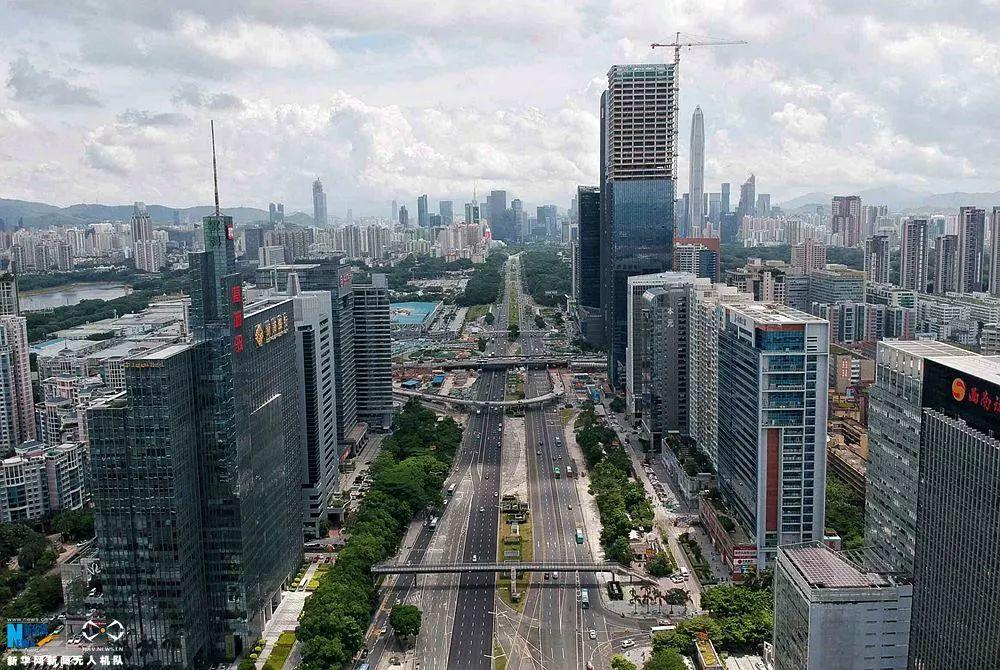 Small in coverage as it is, the city is nicknamed as “China’s Silicon Valley”, many world-renowned enterprises are based in there including Tencent, a Chinese IT tycoon, Huawei, China’s largest smartphone maker and DJI, a world-famous drone producer. Shenzhen is widely called the Dream Land. 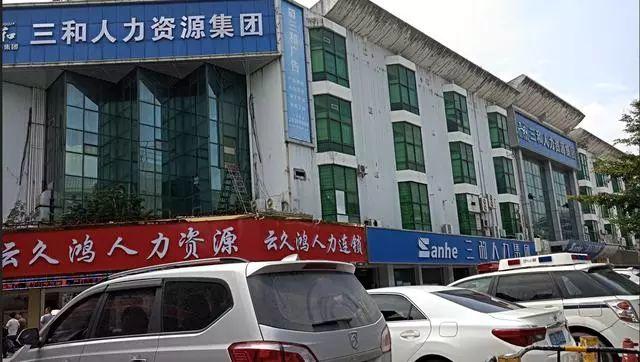 Every year, countless young people flock to this dynamic city with their wildest dreams. But under the city’s dazzling appearance, there exists a DARK world, it is the infamous SanHe Talent Market. Far from talented, people who looking for job opportunities in there are probably the most untalented, most incompetent and most obscure ones. They live like rats, or even worse than rats. 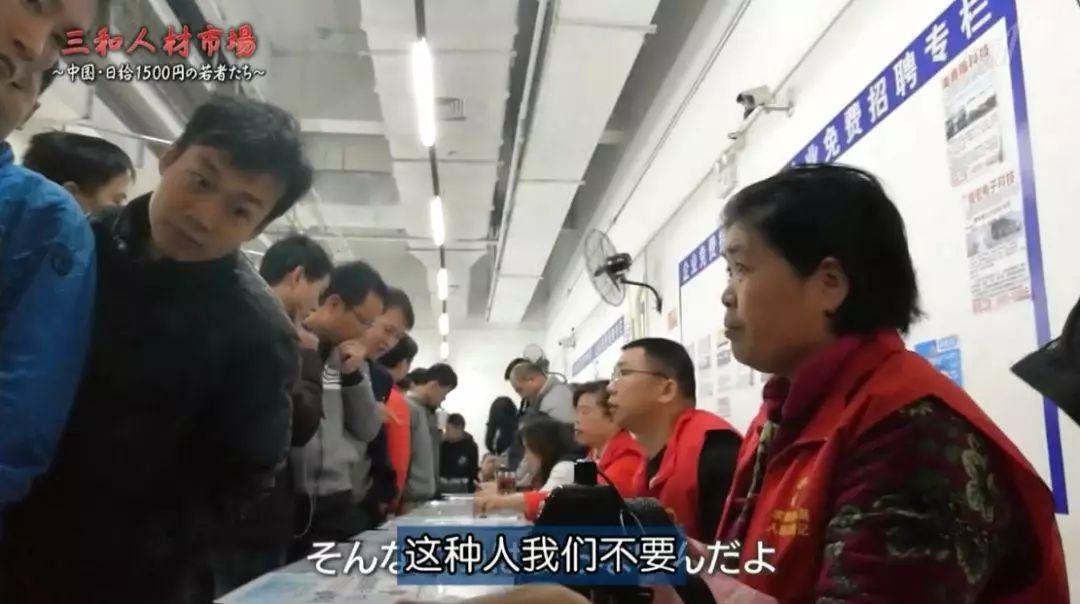 Every day, many young people come here and search for job openings. Illegal work intermediary agents help keep the whole system running in the market and it runs like that:

when a factory wants to hire a part-timer with a salary of 200RMB (29USD) per day, then the manager in charge the factory’s employment outsources the job-hiring to Illegal work intermediary agents with a salary of 150RMB, he himself deducts 50RMB, and then the illegal agents hire job seekers in SanHe talent market with a salary of 100RMB, another 50RMB goes to the agents’ pocket. 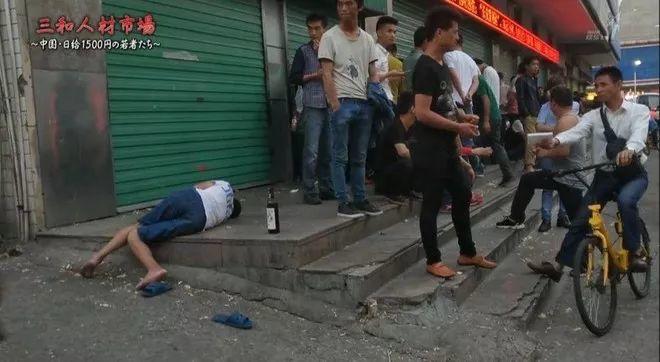 People who make their living by working diligently should feel proud for themselves and deserve to be respected despite what kind of work they do, as long as it is legal.

But most job seekers in SanHe talent market are losers. Why is that? Because their laziness, they have no aims and hopes for life, they stay idle for most of the time and have less or nearly no willingness to work. They are labelled as SanHe Da Shen(三和大神) or SanHe Losers, they share one common tag: only take part-time jobs lasting one or two days long, require employees to pay their salary daily and in cash, work for one day and take a three-day break. 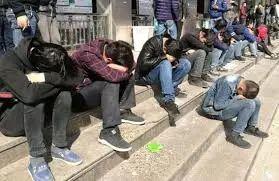 Most of them are in desperate poverty, some of them can’t even afford their basic daily life consumptions.

At night, SanHe Da Shens have no place to live, most of them rent a bed in a hostel with 15RMB(about 2USD), some can’t even afford for renting a bed, so they find a relatively clean place and just sleep on the ground or on park chairs. 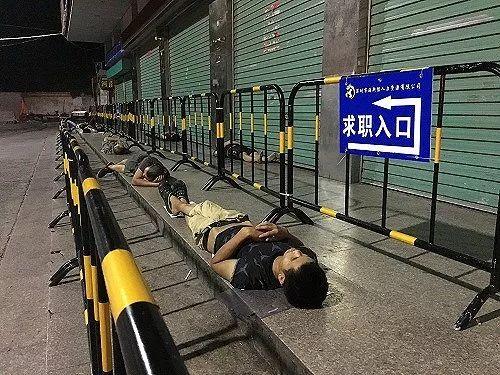 Sleep on the ground © Image | Google

When they feel hungry, they buy a bow of soup noodle, the noodle is cooked in a very simple way, it only costs 4RMB, 1 more RMB if you want to have a boiled egg in it. 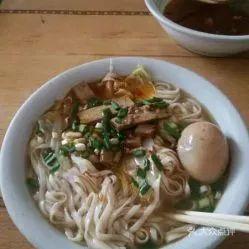 For SanHe Da Shens, they have been driven into a corner and can’t find a way out. 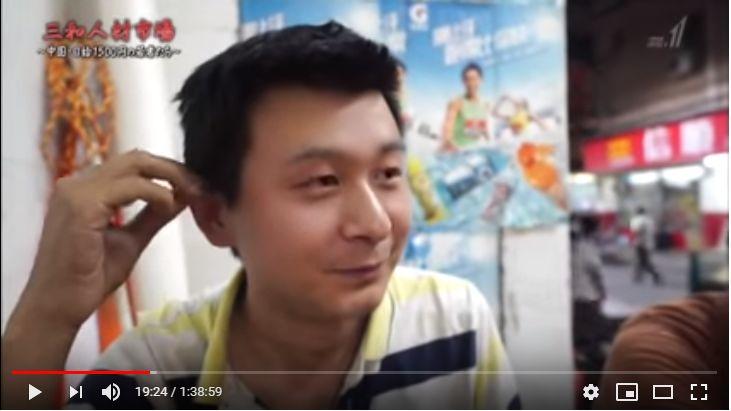 The 27-year-old Song once worked as an assembly-worker in FOXCONN, a high-tech company famous for iPhone-assembling, but he felt tired after several-months work in there. So he resigned. He has been in SanHe for a while, he refuses to go back to work in a factory and thinks it is useless and meaningless. To support his life, Song takes daily-wage jobs from time to time. Song has no money to rent himself a house or even a bed in a hostel, he often sleeps on park chairs, but he has got arrested for that two times.

“My life is very boring. When I was a little child I had a dream, but now I only daydream. I can’t go back any more. My mom called me and asked me to go home, but I refused, it’s a shame to go home without making enough money, I can’t even afford a train ticket” says Song. 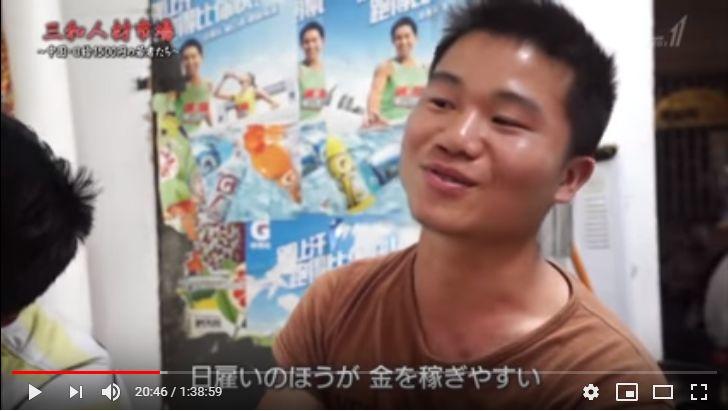 Li is Song’s best friend in SanHe, Li is also 27 years old and he is still single.

“No girls will choose a boy like me. In a marriage or relationship in China girls ask a lot from boys, and I have nothing, I have no future ” says Li. 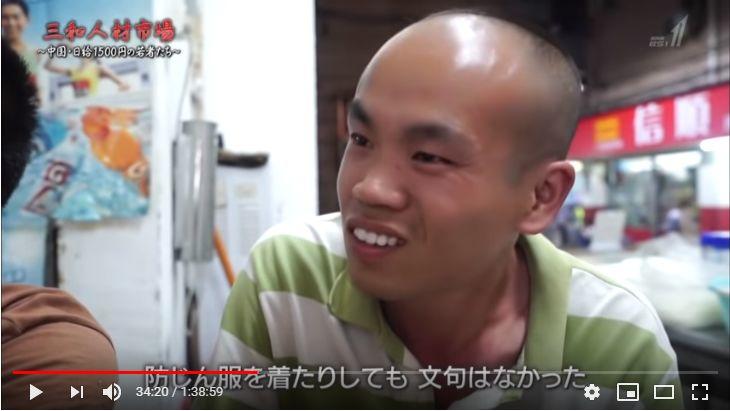 Zhao refuses to be labelled as SanHe Loser and insists that he is different.

“I once saved 200000RMB in my bank account, can you imagine that, but I lost it in gambling. Every my friend around are idling their youth away, I have been influenced by their negative thoughts”

Zhao once had a good job with a decent salary, but he resigned because has no patience to work in one place for a long time.

“I don’t like the current situation either, I hate myself but I don’t how to change it, I’m now deeply trapped in this mire.” 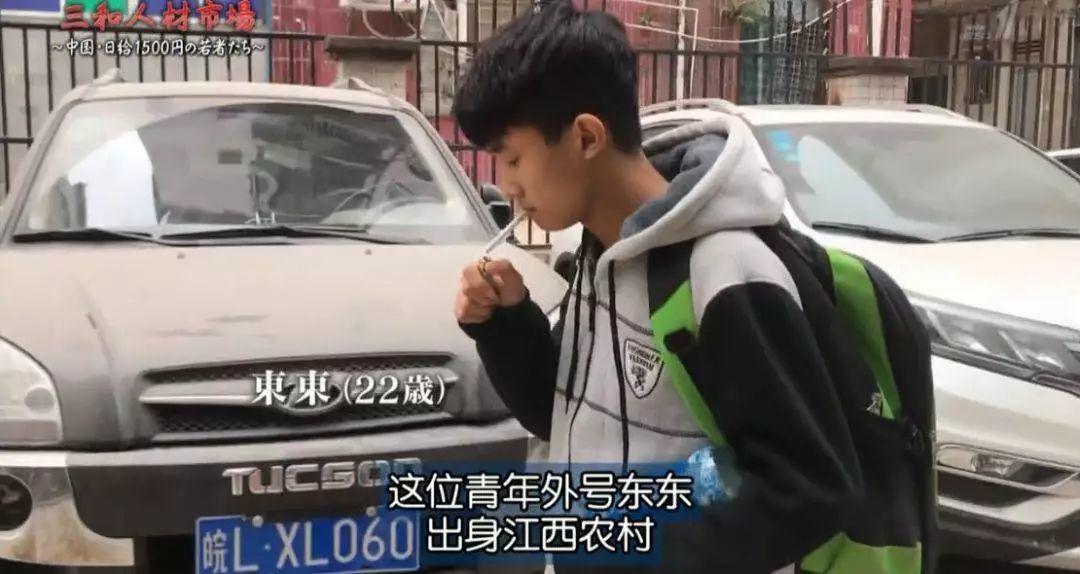 Recently, a worrying fact has emerged in SanHe talent market, that is more and more post 90’s workers come to this place and look for jobs. And Dongdong is one of them.

Dongdong is a 22-year-old boy, he has come here for a while and he is still looking for a job. Dong dong quitted his last job because his boss blamed him for taking nap and playing mobile games during working time.

“I can’t stand any blames, I hate to be blamed,” says Dongdong. Dongdong loves playing games either on the computer or on mobile, he doesn’t have much money but he goes to the net bar to play computer games very often.

When he feels tired at night, he rents a bed in a hostel. Bedclothes in the hostel are very dirty, but Dongdong says it’s OK. 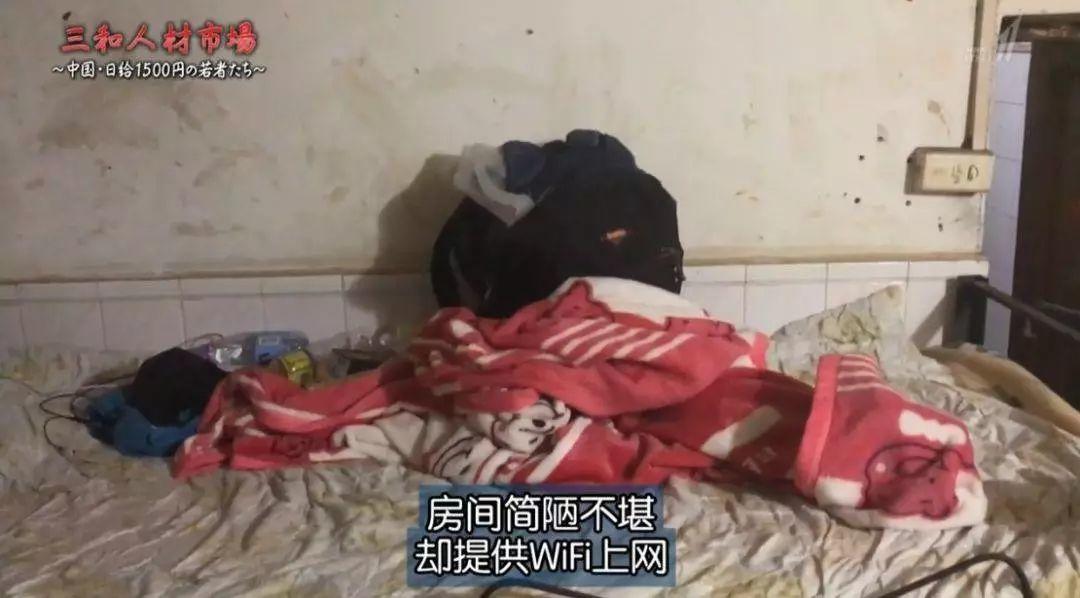 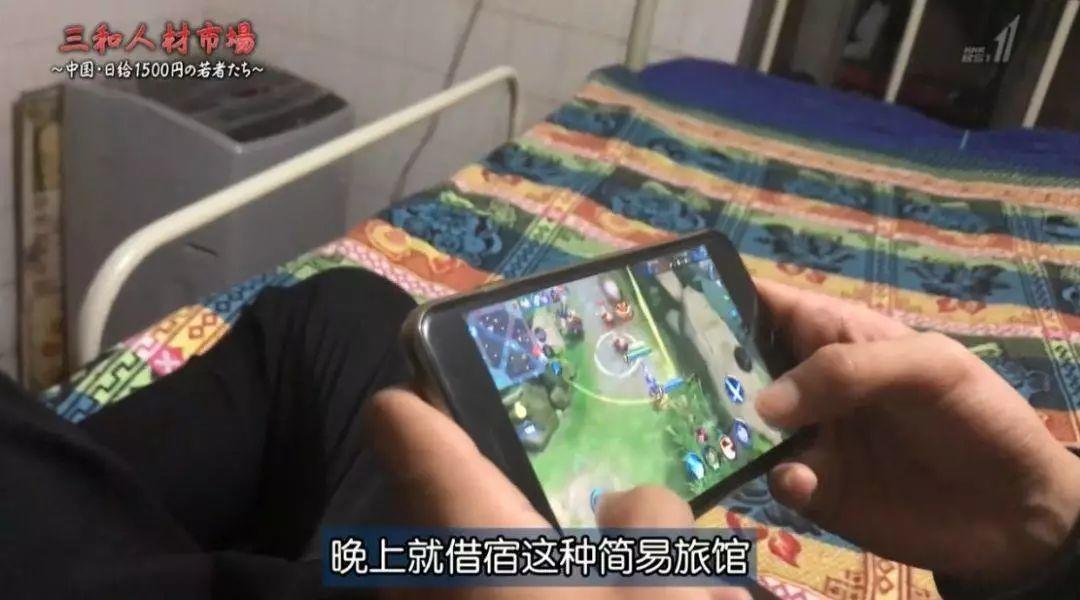 “Everything is fine and good as long as the hostel provides free WIFI access. With WIFI, I can play games on my mobile phone and game is everything for me.”

What SanHe Da Shens want are three things: high salary, easy money and quick money. They come to this big city and find it is so hard for them to achieve what they want, so they fall into desperation and gradually give up on themselves.

But they should realize that life is not so easy for most people on this planet, you want a good life you fight for it not wait for it. Always be positive and stay inspired!

“Hope is a good thing, maybe the best of things, and no good thing ever dies”